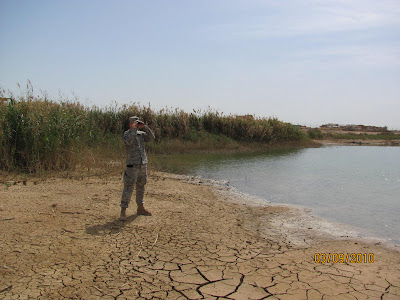 I have a lot of observations written in my notebooks from my last deployment to Iraq (October 2009 to July 2010). Now I have an outlet where I can put them all. My lists on this blog are not too useful since they are static and the data cannot be manipulated.

eBird is a project of the Cornell Laboratory of Ornithology that was launched in 2001 to automate the collection of bird observation data. It includes maps, checklists and statistics. The aggregate data is available on the web.

In June of 2010 global eBird was launched which allows entry of observations from around the world. The interface worked very well with my Iraqi observations. If a species is rare or numbers are large the interface asks you to confirm the data before submitting. I was asked to confirm for Barn Swallows in February and for an observation of 150 Wood Pigeons, both routine occurances, so its not perfect.

There was almost no data for Iraq, so I'll be entering mine. I encourage everyone with Iraq bird observations to enter the data in this system, it will be very valuable for those studying Iraqi Avifauna since the system can do such things as generate maps and create checklists and frequency data. 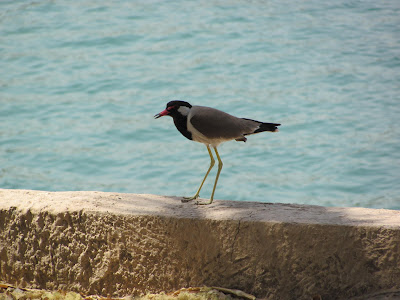 A couple of weeks ago the PBS program Nature featured the work of Azzam Alwash and the staff of Nature Iraq. I made a point of watching it with my kids. Like Azzam, I am optimistic that one day ecotourism will flourish in Iraq. Save the violence, which decreased exponetially between my 1st tour in 2004 and my second in 2009/2010, the country has the right combination for successful ecotourism. I can imagine visiting the ruins of Ur and Babylon then birding Marshlands National Park looking for Sacred Ibis and African Darter to add to my life list. Perhaps my third trip to Iraq will be the one where I can leave my weapons behind.

Again I cannot give enough accolades to Azzam and his staff at Nature Iraq for their tireless and critical work protecting and understanding Iraq's Natural treasures. A special hello goes to my friend Mudhafar Salim, a tireless ornithologist who I saw in action with Azzam in the documentary. 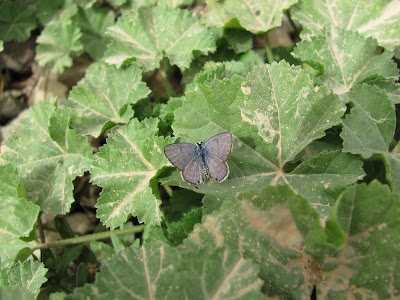 In March when we still had a significant amount of green around our building, with lots of small orange flowers we had a lot of butterflies visiting including two types of Blues (the one pictured and a tiny species with a wingspan perhaps half an inch across). Also we had a good number of Cabbage Whites and Painted Ladies. In April, as the Eucalyptus 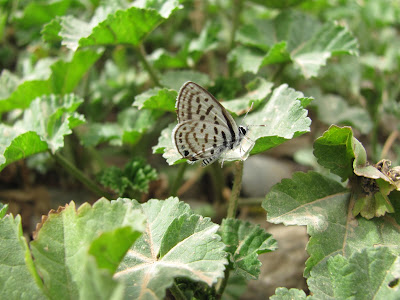 trees flowered, we had massive numbers of Painted Ladies on base. I counted over 300 in a short walk to the gym and back. For a week or so they were everywhere, including getting in the buildings. I had the same experience with a sudden explosion of painted lady numbers at the same time as the Eucalyptus flowering. Recently I have been seeing some more blues and this butterfly (some type of Nymphalid) with dark wings and orange spots. 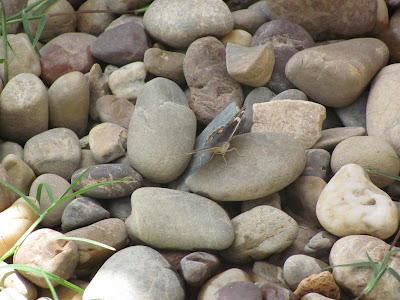 Posted by Jonathan at 1:47 PM 15 comments:
Email ThisBlogThis!Share to TwitterShare to FacebookShare to Pinterest 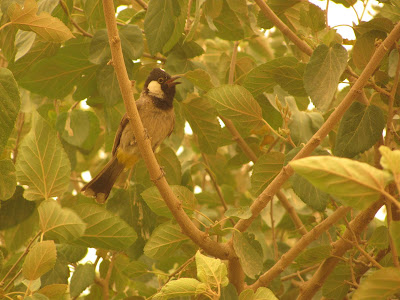 Today we are having a nice dust storm. The White-cheeked Bulbuls around the building were very active today dispite the dismal weather. This one was singing its heart out in our mulberry tree and chasing house sparrows around. 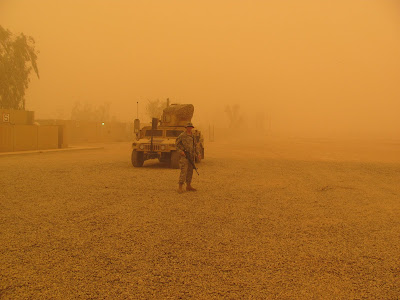 Posted by Jonathan at 10:05 AM 4 comments:
Email ThisBlogThis!Share to TwitterShare to FacebookShare to Pinterest 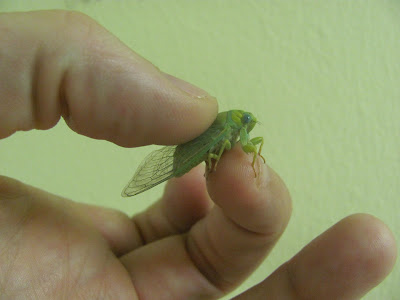 In the past week or so I have been hearing extremly loud clicking sounds coming out of the trees around base. I thought they were either katydids or cicadas. It has been incredibly hot, hitting around 117 degrees F for several days in a row. The critters making the sounds didn't seem to mind the scorching temperatures.
Several days ago I was walking back to my trailer at about 2 AM, the temperature was still in the nineties. In one Eucalyptus tree next to a portable construction light had what sounded like dozens of the clicking critters. After a second of searching I found the culprit, small green cicadas with blue eyes! The color was incredible and contrasted dramatically with the dust covered leaves. I caught a few and went back to my building to get my camera. The cicadas buzzed angrily like little toy noisemakers in my hands. Two soldiers smoking outside didn't know what to make of the noise when I walked up.
When I went back to the tree there were cicadas buzzing around the construction light and bats circling catching insects. I have not seen or heard any large aggregation of cicadas since. I'm wondering if there was simply a large emergence and then dispersion. 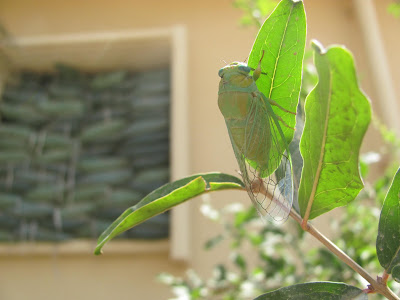 Posted by Jonathan at 9:41 AM 9 comments:
Email ThisBlogThis!Share to TwitterShare to FacebookShare to Pinterest
Older Posts Home
Subscribe to: Posts (Atom)