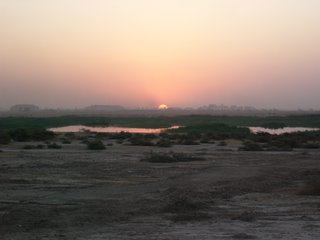 This several acre pond surrounded by reeds is a focus of bird activity on base.

I found that another birder has made it to Anaconda. His main interest is reptiles but he's looking out for the other critters too. His work area is near the other large pond on post. He's got a few photos on his blog of black-winged stilts. I'm looking forward to hearing about his observations.

Birdlife International has put Google Maps links on their IBA (Important Bird Area) pages. I was thinking of doing this myself, but I'm happy for someone else to do the work. What's needed now is all the IBA locations on one interactive map.

I've looked through some satellite photos of IBAs in Iraq using Google Map by typing in the coordinates. This new function on the IBA pages makes it much easier to explore.

Here's a few interesting ones to check out. To view the map click on the map link on the IBA page and then click on satellite View and zoom in.

Bahr al Milh - A large artificial lake created in the late 1970's as a flood control basin for the Euphrates. It has become an important area for waterbirds. In 1979 over 100,000 coot were reported to be wintering on the lake along with tens of thousands of ducks including Smew, Gadwall, Shovelers, and Marbled Teal. Large concentrations of grebes were reported including 600 Great Crested Grebes and over a thousand black-necked grebes. Also present in the area are Dalmatian Pelicans and Greater Flamingos.

Samarra Dam - The Tigris River is dammed at Sammara creating a large wetland next to the city. Almost 150 species have been recorded here. Many raptors migrate through this area in the fall. In the marsh such species as Goliath Heron, Great Bittern, Common Pochard have been seen. Gray Hypocolius, See-See Partridge and Dead Sea Sparrow are breeders. In 1992 a pair of Sociable Plovers was reported from here.

Ser Amadiya - This is a mountain ridge that reaches elevations of up to 2000 meters near the Turkish border in Iraqi Kurdistan. The birdlife of the oak and juniper forests is unlike that of the rest of the country. Eurasian Nightjar, Syrian Woodpecker, Eastern and Western Rock Nuthatch, Ortolan Bunting and the unusual corvids the chough and the alpine chough. 3 Species of vulture are resident in the higher elevations (Lammergier, Egyptian and Griffon). In early spring flocks of snow finch sometimes visit the snowfields.

Khawr al Zubair - A huge tidal mudflat area near the Persian Gulf, apparently never surveyed for birds but likely an important area for wintering waterbirds.
Posted by Jonathan at 10:06 PM
Email ThisBlogThis!Share to TwitterShare to FacebookShare to Pinterest