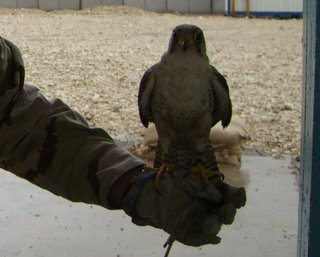 Dave, who has a relative serving in Iraq sent me a picture of a falcon from the Mosul area. An Army unit bought this falcon for a local man. He came and gave a demonstration for some of the soldiers. I think it's a Lanner Falcon (Falco biarmicus) but its hard to tell from the angle. The other possibility with those breast markings is a Saker Falcon (Falco cherrug). Let me know if you can give a more definitive ID. (Click on the picture to enlarge.)

Falconry is a very popular sport, especially in the Emirates and some of the other gulf states. It is associated with the traditional Arab way of life. According to Arabian tradition the birds would be released into the wild at the end of hunting season. This tradition has been continued for the last 11 years in Pakistan where birds from the Gulf States are released. In modern times people kept the best falcons year after year. In northern Iraq the sport is said to have been practiced for 2000 years. Some studies put the origins of falconry in the remote past. Each winter, wealthy Arabs travel places like Kazhakstan and Pakistan to fly their birds. This year, because of bird flu the hunters are sticking closer to home and hunting in Iran and North Africa. One of the favorite prey is the Houbara Bustard, a bird that is actually bred in the Emirates to try to replentish falling populations.

Many species of Falcons such as the Saker, Perigrine and Gyrfalcon are protected species and a black market has developed. A wealthy hunter may pay incredibe amounts (up to $40,000 dollars) for a bird that might have been trapped in Russia or hatched from eggs taken from the wild. Because of their investment owners spend lots of money taking care of the bird's health. Bahrain and Dubai even have Falcon hospitals.

In the past some falcons in Iraq were captured in the Sinjar Hills in northern Iraq. Many are also caught in China and Pakistan and sent to the Gulf Region. To try to deter the illegal trade the UAE has started a passport program for Falcons to try to track the legitimate birds entering the country. Now with bird flu there is concern that infected birds may come from the affected countries.
Posted by Jonathan at 9:24 PM
Email ThisBlogThis!Share to TwitterShare to FacebookShare to Pinterest