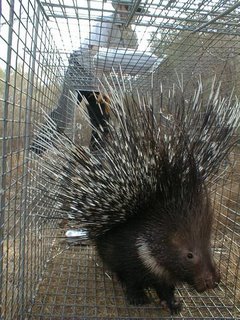 Here's another critter people don't expect to see in Iraq, a Crested Porcupine (Hystrix indica). This large rodent can weigh up to 40 pounds. The photo was taken by Rocco Moschetti, a vector control specialist who worked in Iraq for 2 years. This porcupine wandered into a trap set for feral dogs at Al Asad Airbase in Al Anbar province. Other interesting animals he caught included jungle cat and striped hyena.

Another birder is now active at the Camp Victory complex near the Baghdad International Airport. John is an Air Force Officer on a 4 month rotation, which should get him into the best times for fall shorebirds, landbirds and waterfowl. John has written about some of the birds he's seen at his blog and he's started a yahoo group called Operation Iraq Birds where he'll be posting some of his pictures. He's at least the fifth resident of the base complex who has been a serious birder. I was only a visitor, but I did see some great birds on base.

Two of his predecessors LTC Bob and Joe H from Alaska both compiled impressive lists within the confines of the few interconnected bases. The variety of habitats from large lakes, reed-lined canals, scrub and mudflats add to the bird diversity.

Laura Erickson at Birderblog is still getting photos of birds from people stationed in Iraq. She's accumulated quite a gallery that is worth checking out.
Posted by Jonathan at 10:55 PM
Email ThisBlogThis!Share to TwitterShare to FacebookShare to Pinterest