Another Lesser White-Fronted Goose tracked from Siberia to Iraq

In 2004 a satellite tagged Lesser White-fronted Goose was tracked from its nesting grounds in Siberia to its wintering grounds in Iraq. For the first time the entire round trip migration of a sing 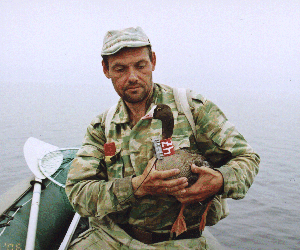 le bird of this species was documented.

The LWFG is a globally threatened species that has experienced a significant population decline and is assessed to be a moderate to high risk of extinction due to habitat fragmentation and hunting pressures. Almost nothing is known about the population wintering in Iraq. Populations in Azerbaijan and Iran have seen dramatic decreases according to to waterfowl biologists.

In July of this year in the Putorana Plateau in the Ural Mountains of Russia, another group of this threatened species were tagged with satellite transmitters. The birds were captured by netting them from a boat on open water during the post-breeding moult, when they cannot fly for a number of weeks (see photo above) . Of the six birds, only 2 were still transmitting data as of December 2006.

Both birds had arrived at a reservoir on the Iran/Azerbaijan border near the Azerbaijani city of Nakhichevan in Early November. One bird had made its way to the Euphrates Valley in Syria by early December, just over the Iraq/Syria border. Currently this bird is spending its time in a wetland area about 50 km north of Al Qaim in Al Anbar Province. The bird has been tracked as close as 5 miles from the Iraqi border.

The second bird was still in Azerbaijan on December 25th. On December 29th the bird had moved 650 km south to Maysan province in Iraq very close or in the Birdlife International IBA of Haur Al Sa'adiyah. Much of the area appears to be agricultural land now. Surveys of the area in the 1960's and again in 1979 recorded large numbers of wintering waterfowl and shorebirds including Ruddy Shelduck, Pintail, Gadwall, Wigeon, Shoveler, Teal, Mallard, Greylag Goose and Greater Flamingo. In 1979 up to 2500 Common Cranes were wintering in the area.

On January 5th, 2007 the bird had moved about 60 km northwest to a rich agricultural area approximately 25 km east of the city of Kut in Wasit Province. It would be interesting to find out where this bird is feeding since Wasit Province reported a bumper crop of both Wheat and Barley this year. In some other countries, the government has paid farmers to leave some grain in the field for waterfowl.

This bird is visiting some of the same areas as the bird tracked from Siberia in 2004/2005. The surveys of the southern Marshes of the last several years have demonstrated that these wetlands remain an important wintering area for Eurasian waterfowl.

Posted by Jonathan at 9:51 PM
Email ThisBlogThis!Share to TwitterShare to FacebookShare to Pinterest