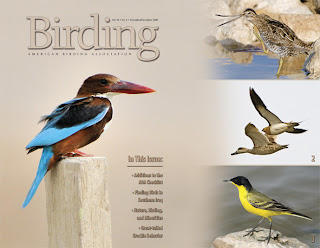 I've been remiss in not writing about this sooner. The November/December 2008 Birding magazine, published by the American Birding Association, has a fantastic photo essay of birds observed and photographed by Colonel Thomas Dove, a physician who served at Tallil Airbase near Nasiriyah in Southern Iraq. The ruins of ancient Ur are just next door to the base.
Colonel Dove served in Iraq from October 2007 to June 2008. He accumulated an impressive list of species and photographed over 100 species. I laughed reading his account of a particular "No Swimming" sign popular with a group of Pied Kingfishers. When I visited the base in December 2004 one of the kingfishers was beating a small fish against the sign to emphasize the point!
The photos are spectacular and the essay echoes the sentiments of many people who have found beauty and inspiration in Iraq's avian residents. I'm particularly jealous of his sightings of Greater Flamingos, which I never saw. A picture of 2 of the flying flamingos is featured in the article.
Thanks Col. Dove for your first rate pictures and article.
Online version of Birding in Iraq - A photo Essay by Col. Thomas Dove
Additional Web Content - Hard to Identify Old World Warblers from Tallil
Posted by Jonathan at 10:41 PM
Email ThisBlogThis!Share to TwitterShare to FacebookShare to Pinterest