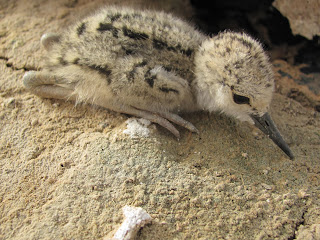 I was up at the north pond checking out the wildlife. The Black-winged Stilts were making a racket and flying around. A few days before I thought I had seen some chicks running into the reeds. I found this little fuzzball under a big rock by the water when I was looking for frogs (there was also a frog under the same rock). The stilt chick didn't move a muscle for a minute or so then ran down to the water and surprised me by swimming away, paddling along with its ridiculously long legs. The adults really went wild when the chick belted out its alarm call and started trying to crap on me and the other sergeant with me. Later in the day I saw 2 more chicks feeding out on the mudflats.
Making a getaway 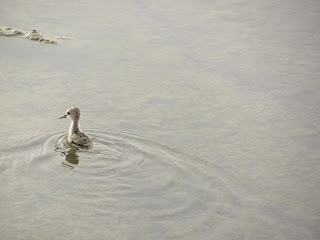 Posted by Jonathan at 1:27 PM
Email ThisBlogThis!Share to TwitterShare to FacebookShare to Pinterest