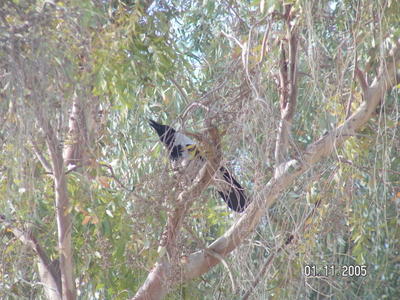 LTC Bob near Baghdad has only a couple more months until he redeploys back home. He has a few more posts up on Silflay Hraka with some great pictures.

The picture of the male black francolin may actually be one of the 2 individuals I saw at Camp Victory last year. He also has some pictures of francolin chicks and a post on Spur-winged Plover with pictures of plover chicks and a black-winged stilt chick. His latest post is on the Collared Pratincole and an Indian Roller post is forthcoming. Last month LTC Bob wrote about the Golden Jackal.

In other birding news, The Field Guide to the Birds of the Middle East, the guide I used in Iraq is being published in Arabic in February of 2006. This is a very significant event in my opinion. Just as the Peterson Field Guides spawned a generation of birders in the US, I hope that this book will do the same in the Middle East. It would be a great thing if each school in Iraq could have a copy to inspire young naturalists.

On another subject, I've been reading the very interesting journal of Andrew Cote, a guy from Connecticut who just came back from a trip to Iraq in August. He was in Iraq to train farmers in modern techniques of beekeeping. Here's a story about him in a local paper.

Reading through the entries I learned that some of the beekeepers in the Kurdish north have problems with European Bee-eaters for a few weeks during migration when the birds gorge themselves on Honeybees. In one village one of the beekeepers even produced the carcass of a bee-eater. The picture is on the website in his gallery (I can't seem to link to it). There are also interesting pictures of the traditional beehives which are made of straw and mud. In the fall these hives are cracked open like a giant nut to get the honey out.

The whole site is fascinating. I learned that, as in the US, the dreaded Varroa Mite has decimated the honeybee population, decreasing it perhaps 90%. Other problems are the Oriental Hornets, gigantic orange and yellow beasts that can tear up a hive. I dispatched quite a few of them when I was in Iraq. Having an insect net came in handy when it was bug killing time. I just read a story this week about how honeybees sometimes kill one of this hornet's even larger relatives, the Asian Giant Hornet, by cooking it to death. The bees swarm over a hornet and form a ball around the insect. They beat their wings furiously creating enough heat to kill the hornet. They actually come only a few degrees from cooking themselves. Both Oriental and Giant Hornets can destroy a large hive. They crush the honeybees in their mandibles one after another until the bees are all dead. They then take away the juicy larvae in the combs.

After reading through all the entries and thinking about my Father's hive he had while we were growing up I felt like beekeeping might be something I might like to try when I have a little more free time.

Doing a bit of research I found that the clay and straw hives made excellent weapons in the past. A kind of ready-made bee grenade that could be dropped on the enemy. Here's an entry from a book called Robbing Bees: A biography of honey by Holley Bishop published earlier this year describing such a use in the battle of Hatra in Iraq.

Before sophisticated box hives were invented, bees kept in twig, straw or clay vessels of various sizes were adapted as weapons. Bee grenades could be hurled through the air or dropped on enemies. By the time they reached their target, the projected bees were
outraged, ready to explode in a fury of stings. In book III of his History
Herodian describes the second century seige of Hatra, in modern-day Iraq, and
the use of bees as weapons.

Every kind of seige engine was used against the walls (of the city) and no technique of seige operation was left untried. But the people of Hatra rigorously defended themselves by firing down missles and stones onto the army of Severus below and causing them a good deal of damage. They made clay containers filled with little flying insects that had poisonous
stings, which were then fired off. When the missiles fell onto Severus’ army, the insects crawled into the eyes and exposed parts of the skin of the soldiers and stung them causing severe injuries.

Posted by Jonathan at 8:32 PM 2 comments:
Email ThisBlogThis!Share to TwitterShare to FacebookShare to Pinterest

A few days ago I wrote an entry that was promptly launched into Blogger oblivion. This time I'll back it up.

Laura Erikson at Birderblog.com has been getting some more photos of Iraqi birds from people stationed there. She has 15 species in her gallery and all are worth looking at. She has a picture of a Scops Owl (possibly a Pallid Scops) taken in northern Iraq by Jim Lewis. I'm very jealous. I saw both Barn Owls and Little Owls at LSA Anaconda. Both seemed to be residents there, but no Scops Owls. Of all the birders in Iraq I've heard about in the last year Jim is the only one who has seen a Scops owl. Avibase lists 10 species of owls from Iraq of which 3 are familiar to North American birders (Barn, Long-eared and Short-eared). Since some of them are woodland species I suspect a few are only found in the mountain forests along the Turkish border. Here's the list with links to pictures and info.

For those stationed currently in Iraq here's a few links for nest box designs that could be erected either on your FOB or in a village to encourage nesting. I'm not sure about all species of owls, but some local farmers around LSA Anaconda considered Little owls or Booma bad luck. Apparently its a widely held superstition in the Arab world that to see an owl is bad luck to hear one is worse. Maybe they can be convinced that killing rodents around the village or farm is a good thing.

These plans may have to be adapted for the high temperature in Iraq. Both species nested and roosted inside the large concrete bunkers at Anaconda, probably because they were cool during the summer.
Posted by Jonathan at 11:44 PM 11 comments:
Email ThisBlogThis!Share to TwitterShare to FacebookShare to Pinterest

I'm back from a fantastic week in Wyoming and Montana. I saw one life bird, Trumpeter Swan and many, such as Clark's Nutcracker, that I've only seen once or twice before. We didn't see any Grizzlies at Yellowstone, apparently this has been a good year for pine nuts and they are busy up in the mountains fattening up on nuts and Army Cutworm caterpillars (Spodoptera sp.).

On the birding front in Iraq I found a piece written by Major Ed Lowsma to a local Audubon Society in Florida describing some of his birding experiences.

I've been making my way through the wonderful Emirates Natural History Group website. This very active club from the UAE takes frequent trips around the Emirates and Oman. Special interest groups cover all manner of creatures to archeology and local history. It would be fantastic to have a similar group devoted to the natural history of Iraq.

As in the US, the shorebird migration is underway again in Iraq. Sandpipers and plovers of many species will pass through or decide to stay in the ponds and wetlands that dot central and southern Iraq. Because jumping out of a heavily armed convoy to check out the shorebirds at the roadside ponds was not an option, I was frustrated, especially with the smaller sandpipers I saw running around in the mudflats, but couldn't get an ID on them. I was lucky that my base and a few that I visited had ponds where I could spend a bit more time. In the winter there are literally dozens of ponds by the side of the highway, most with at least a few birds all the way from just over the Kuwaiti border to Baghdad. A birder could probably spend a week slowly making his or her way up from Kuwait, stopping by the road, scanning the ponds. A spotting scope is definitely needed. I would even recommend one for the larger on base ponds. It would have been great for both shorebirds and waterfowl.

Even with my limited mobility I managed to see a good selection of shorebirds. For any readers in Iraq this is a good starting list of what to look for.

** Just a note on Sociable Plover - I saw a flock of about 20 birds I identified as this species in an agricultural area bordering the desert north of Balad in October of last year. Since this is a globally threatened species whose numbers have dropped dramatically it would be a significant sighting. I was traveling in a Blackhawk helicopter at high speed at the time so I didn't have time to study them. I think the chances are good that it was this species as I felt they were different from the numerous spur-winged and red-wattled plovers I saw on the same flight, however, given their rarity and my less than favorable view all I can say is I may have seen this species. Definitely something for others to look for.

Finally, I found a few pictures and maps of telemetry tagged vultures that passed through Iraq on their migration. The Georgian Center for the Conservation of Wildlife has tagged vultures as part of an ongoing study. One was a Griffon Vulture (picture of bird, map of migration route) that was captured in the Republic of Georgia and migrated to Saudi Arabia and back to Georgia passing first down the Zagros mountains of Iran then cutting across the southern desert of Iraq on its way south. On its northward journey it cut across Iraq south of Baghdad and followed the mountains north into Iraqi Kurdistan. The second tagged vulture was a Cinereous Vulture (picture of bird, map of migration route) that follows a very similar pathway south, cutting across the Iran/Iraq border in the same general area. Perhaps a good location to watch raptors.
Posted by Jonathan at 10:17 PM 1 comment:
Email ThisBlogThis!Share to TwitterShare to FacebookShare to Pinterest
Newer Posts Older Posts Home
Subscribe to: Posts (Atom)