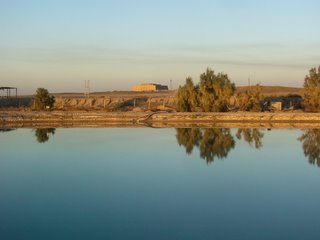 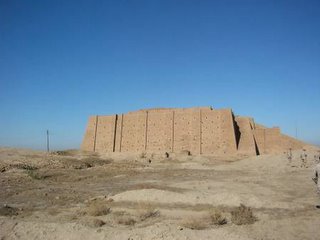 Pond at Tallil Airbase (Ali Base) December 2004. The Ziggurat of Ur is in the distance. I watched a pair of Pied Kingfishers, a Kentish (Snowy) Plover, a Grey Heron and a fine Male Black Redstart here. The city of Ur was the traditional home of the prophet Abraham.

Though this blog is focused on Iraqi wildlife I will make a little detour on this entry.

A reader soon to deploy to Afghanistan asked a few questions that I'll try to answer here.

The first is: what resources are there on Afghan birds? I've only found a few references since Afghanistan has been somewhat neglected since the 1979 Russian invasion. A few old British texts describe the wildlife of the region. Birdlife international has a review of the birdlife of Afghanistan which has a mix of palearctic and oriental species and 460 recorded species. There is one Afghan endemic, Afghan Snowfinch (Montifringila theresae). Happily we have one recent trip report of 82 species made by Anssi Kullberg combining the observation of 4 trips through Afghanistan in 2002. Some spectacular birds are to be seen. A birder from Iraq would recognise many of the familiar favorites: Magpies, Hoopoes, Crested Larks, Pied Kingfishers, Indian and European Roller plus many others. They would also be treated to birds of Indian origin like Brahminy Starling, Black Drongo and House Crow. Some truly exotic birds like the Himalayan Monal, a colorful and rare pheasant, are also on the Afghan list. A somewhat pricey two volume guide has been published this year by Lynx in Spain. The Birds of South Asia is the first guide to fully cover the birds of Afghanistan and at slightly less than $100 US is a good investment for someone spending a long time in Afghanistan.

Another question involved digiscoping and blogging from a forward deployed area. Others may want to add their 2 cents here. I did not have a great camera for birds, nor a scope. If I had to do it again I would try to bring both. I missed a lot of birds because they were out of binocular range.

I found that blogging anonymously is the way to go. It simplifies things considerably and makes the command much more comfortable with your blogging in general. My self imposed rules were very strict because of my role in battalion intelligence. I never revealed my name, my unit or my location in the country. We had many incidents that I never wrote about on my other blog because a relatively smart person could identify my location from the incident and perhaps use it for battle damage assessment. When it came to my wildlife watching, any and all my writing was seen as universally innocuous and not an operational security issue.

I've started posting again on HomeRange, my general natural history blog. It started out as my nature observations but I let it slide in back in May. I recently changed the focus to whatever I feel like writing about, from my observations to interesting news items.
Posted by Jonathan at 9:56 PM 2 comments:
Email ThisBlogThis!Share to TwitterShare to FacebookShare to Pinterest

Michael Yon, one of my favorite bloggers in Iraq, has a contemplative post with lots of bird pictures he's taken in the last year. These include White-cheeked Bulbuls, Mesopotamian Crow and Spur-winged and White-tailed Plovers. I'm always pleased when I find someone, especially a soldier or former soldier in Michael's case, is interested in birds. It is an indicator to me of a person who can get outside of their immediate personal concerns. I guess it reminds me of the archetypal gentleman soldiers, renaissance men like the some of the British soldiers in the Mesopotamian campaign who compiled their observations of birds, mammals, plants and archeology into reports published by the Bombay Natural History Society. Or General Sir Alan Brooke, Chief of the Imperial General staff, enjoying a short walk watching goldfinch and stonechats on the eve of the Normandy invasion. I'm not sure if its coincidence or not but many of these multidimensional characters that I've met have been Marines. I'm not sure if there is something about the Marines that draws the soldier-scholar. Several I have met have been incredible students of history and culture and impressive intellectuals.

On another note I bought a copy of A Systematic List of the Vertebrates of Iraq by Mahdi and Georg (1969). There are 385 species of birds listed. Its a start to a comprehensive Iraq list. Avibase lists 416 species. It will probably be a few years before there is an Iraq Rare Records Committee and an official Iraq list.
Posted by Jonathan at 10:29 PM 1 comment:
Email ThisBlogThis!Share to TwitterShare to FacebookShare to Pinterest
Newer Posts Older Posts Home
Subscribe to: Posts (Atom)