One of the rarest birds in the world, the Northern Bald Ibis has been satellite tracked to extreme western Iraq during its migration south from the breeding grounds of the tiny remenant population of 13 birds in Syria (discovered in 2002) to Yemen. The name of the male bird tracked through Iraq is Salam (Peace). Hopefully, this name will be prophetic for both the birds and Iraq.

The bird was recorded in Iraq on the morning of July 18th having flown 207 km from its breeding grounds in Palmyra, Syria since the day before. The bird is currently in Western Yemen along with two other tagged birds.

The fact that there are more Northern Bald Ibis in capitivity than in the wild highlights their tenuous hold. Another small wild population exists in Morocco.

The bird once found throughout Europe and the Middle East has experience a spectacular decline. A colony in Turkey dropped from 600-800 pairs in 1954 to 6 pairs in 1980. It was last wild birds nested in 1989, when the remaining few birds were captured for a captive breeding program.

After going undiscovered for so long in Syria, perhaps there is a chance that other relict colonies exist in Syria and maybe even remote areas of Iraq.
Posted by Jonathan at 12:57 PM 1 comment:
Email ThisBlogThis!Share to TwitterShare to FacebookShare to Pinterest

Birdlife International has announced the discovery of breeding Basrah Reed Warblers far out of the known breeding areas of Iraq and Iran. 4 birds including a recently fledged juvenile were found in Israel's Hula Valley in June 2006. A newly discovered disjunct population would be great news for this ICUN Red-listed species. The revegetation of the southern marshes of Iraq also bode well for this small songbird whose population may have dropped up to 80% since the early 1970's. In Iraq the bird has been found in reed-filled marshes and riverbanks from Baghdad to the Shatt Al-Arab marshes in the south. In 1981 a survey reported breeding birds in the Jadriyah section of Baghdad right across the river from the Green Zone. The birds might survive in small patches in greater Baghdad, though the original site now has been significantly degraded. The stronghold remains the lower Mesopotamian marshes.
Posted by Jonathan at 7:08 AM 1 comment:
Email ThisBlogThis!Share to TwitterShare to FacebookShare to Pinterest 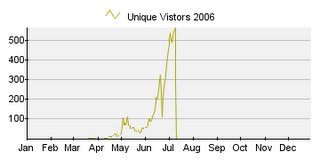 I wish I knew what was happening at my other site Iraqfauna.wikispaces.com. The unique visitors are going through the roof! My hope is that it will be used primarily by Iraqis to share information on the country's animal biodiversity. So far I've been the only editor, so its not living up to its potential as a collaborative site. I have been working on the Iraq bird list and slowly adding Arabic names and links to both species photos and range maps, where available.

The Sphingidae of the Western Palearctic - Tony Pittaway's comprehensive site covering all the Hawkmoths of the region. Detailed species pages have photos of adults, caterpillars and sometimes parasitoids. An excellent resource.

Scorpions of Iraq - A pictorial introduction to the species of scorpions in Iraq by Norwegian scorpion researcher Jan Ove Rein.

FISH
FISHBASE - List of Fish of Iraq This incredible resource has over 1000 collaborators and has a huge amount of info on Iraqi Fish derived from their database. Info includes pictures, bibliography, collection data.

Freshwater Fishes of Iraq - A project of Brian W. Coad, a scientist at the Canadian Museum of Nature in Ottawa. In addition to a great picture of a large Tigris Salmon (Barbus esocinus), this site has the most authoritative species list, a list of Arabic fish names and a huge bibliography of over 1500 entries.

Birding Babylon - Natural history notes from Iraq. Started in March 2004 when Jonathan Trouern-Trend deployed to Iraq with the US Army.

Birdlife International's Important Bird Areas in Iraq - Link to descriptions and map pages of areas identified as IBAs in Iraq.

Birds of Kuwait - Part of Abdul-Rahman Al-Sirhan's fantastic site on the wildlife of Kuwait. He has spent the last few years photographing and documenting the fauna of Kuwait and has a large number of great photos. Most bird species found in Kuwait can also be found in parts of Iraq. Google's Arabic-English translation tool can be used read the Arabic parts of the website.

Iraqi Marshlands Observation System - a collaborative project that uses satellite imagery and landcover analysis to document the restoration of the Mesopotamian Marshes in Southern Iraq. Includes weekly imagery. April 2006 - Marsh Vegetation at 58% of pre-drainage levels - In March 2003 the marshes were down to approximately 7% of historic levels.

University of Basrah Marine Science Center - An institution devoted to studying the study of the biology and environment of the southern Iraqi Marshes, the Shatt Al-Arab and the Arabian Gulf. Publishes a newsletter and the Journals Marina Mesopotamica and the Journal of Aquaculture.
Posted by Jonathan at 4:16 PM 4 comments:
Email ThisBlogThis!Share to TwitterShare to FacebookShare to Pinterest
Newer Posts Older Posts Home
Subscribe to: Posts (Atom)