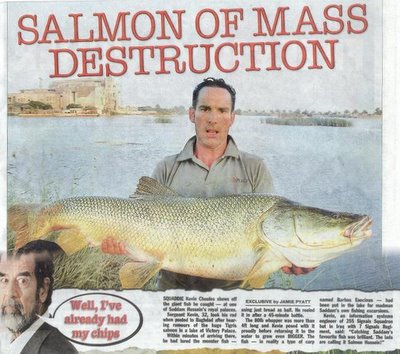 Tigris Salmon or Pike Barb (Barbus esocinus) - Iraq's largest freshwater fish. Reputed to grow up to 6.5 feet long and weigh a few hundred pounds. This picture was taken at Camp Slayer near Baghdad International Airport. Note the palace in the background - Saddam called it Victory over America Palace. When I was at Slayer I saw some huge fish splashing around. I also saw announcements for a fishing contest. I think this would have won it at around 75 pounds.

The weather in Iraq has cooled down considerably. Many of the winter resident birds have returned to Iraq. The huge flocks of rooks, the most social of the crows, have come back as well as the ducks and shorebirds. The nightly spectacle of thousands upon thousands of rooks returning to their roosts after a day of foraging in the surrounding farmland will treat both the residents of the surrounding villages and towns and some of the new troops at LSA Anaconda. Sometimes the rooks would gather in large groups and form a tight spinning column as they rode a thermal.

Last year around this time I gave an interview on NPR about my birding in Iraq.

Mudhafar Salim, an Iraqi ornithologist with the Iraq Nature Conservation Society who has been working with Birdlife International on their surveys of the southern marshes has posted a series of great photographs from some of his fieldwork earlier this year. He has photos of 17 species including the endangered Basrah Reed Warbler, Little Crake, Marbled Teal, Slender-billed Gulls and European Scops Owl.

Included in Mudhafar's other marsh pictures is a shot of 4 fish caught in one of the marshes. I haven't been able to identify the catfish (Possibly an introduced Asian Stinging Catfish), but the other three fish are Mesopotamian Spiny Eels ( Mastacembelus mastacembelus). Other members of this interesting group of fish are kept as aquarium fish, some growing over 3 feet long. Captive fish have a habit of burrowing in the gravel to either hide or look for food. Wild fish most likely do the same hunting for food or hiding from predators.

Brian Coad, a Canadian scientist working with the Canada-Iraq wetlands Initiative is working on a document on the freshwater fish of Iraq. So far he has a checklist and bibliography up. It seems like he has done a lot of work separating out the valid records from records from erroneous reports. Its good to see someone working on a biodiversity project like this. This should be a great resource when completed. Iraq has a number of interesting species including blind cave fish and a large and diverse cyprinid (carp and minnow family) fauna. An added bonus is this document should be a boon to the many coalition troops who enjoy fishing on their off time and catch unusual fish that they can't ID. Perhaps one day there will be fishing outfitters on the Tigris and Euphrates ready to cater to tourists who are after that giant Tigris Salmon. Here's some pictures from a Navy guy in camp victory who brought his flyrod. He also caught a good sized Tigris Salmon as well as some large elongated cyprinids that almost look like a cross between a mullet and a carp. Other species that are being regularly caught is the Asp (Aspius sp.), big-head carp and a large catfish related to the giant wels of Europe and Asia. Some more pictures can be seen at this website. Just scroll down and look for the guys in desert camoflage.

The fourth rotation of US troops is well under way and there are more birders among them. LTC Bob at Camp Victory may be back stateside already. He recently had two more posts. One on the Indian Roller and another on Purple and Grey Herons. Out in Al-Anbar province one of the Marines, Michael Fay has been watching the birds in his spare moments, he also happens to be their artist in residence and has just returned from covering the heavy fighting near the Syrian border. A possible successor to LTC Bob in the Camp Victory Area is Joe H. who is about 1 month into his tour. He posted some of his sighting at birdforum.net